February 22, 2013
Aside from my ardent preservationist beliefs, one of the ways in which I became interested in doing this blog was through a hobby I developed on lunch hours. I like to look through archives of old photos and identify those photos which have been labeled "unidentified." I have found that I have quite a knack for it, identifying nearly 100 photos for the McClung Collection over the years. There has, however, been a series of unidentified photos that have been bothering me for nearly three years. The reason they were so hard to figure out was that they aren't very remarkable on their face. Surprisingly, the inspiration came to me today and I was able to crack them.

In Knoxville, we are very fortunate to have the photograph collection of Jim Thompson. This man photographed just about everything he could lay his eyes upon. He is the source for the grand majority of the photos that one sees in the photo history books of Knoxville. Take a trip down to Steamboat Sandwiches on Market Square sometime and you'll see a huge collection of his photographs. Perhaps the most amazing photographs that he took were from an airplane in the early 1920's. I imagine it was an amazing ride, open cockpit, fabric sides, all of that. From that plane ride, Mr. Thompson capture images of downtown, North Knoxville, factories, and countryside.

The pictures that have been bugging me for several years depicted a sweeping curve of a river somewhere. Between the banks one sees a sliver of an island and several smaller islets. There is a long road with a few houses riding parallel to the river. The scene is reminiscent of Kingston Pike, but the houses don't match those on the pike. The island in the river resembles an island that lies offshore of South Knoxville's Lakemoor Hills neighborhood, but the bends in the river aren't quite right. Other than that, there are fields and trees. That's not a lot to work with. However, one of the river bends has a distinct dip in the middle, just past the island. The river is thin and contains a shoal, not at all like the Tennessee. So on a hunch, I decided to look up river, past the forks.

These are the photos (they've suffered damage over time): 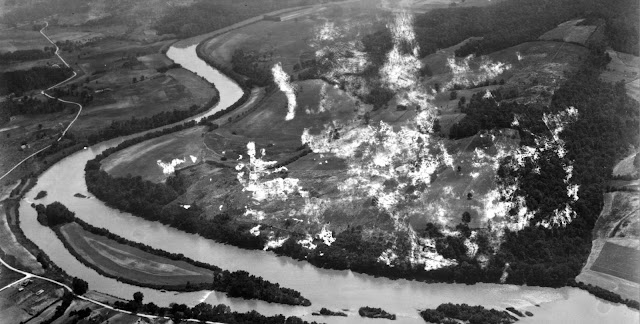 A little further down river, the road, houses, the island.

Closer to the other bank. 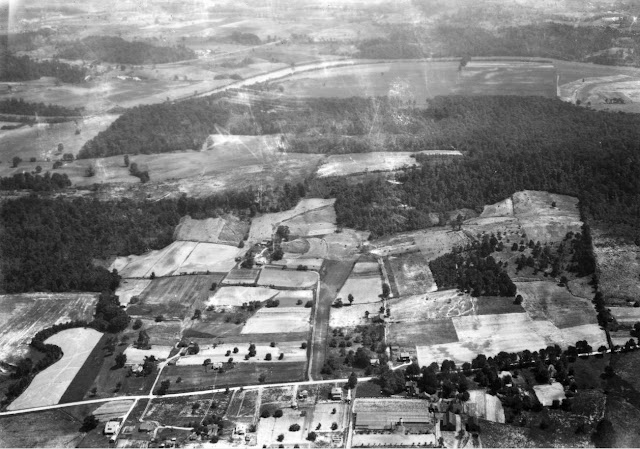 Finally, these two photos are the really interesting ones. They focus on the field above. The plane has made a full circle around, so now we are looking back up the river. 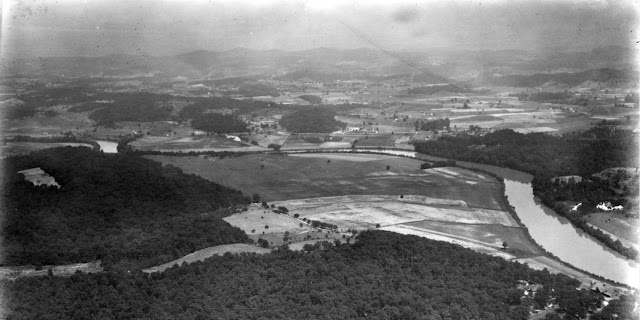 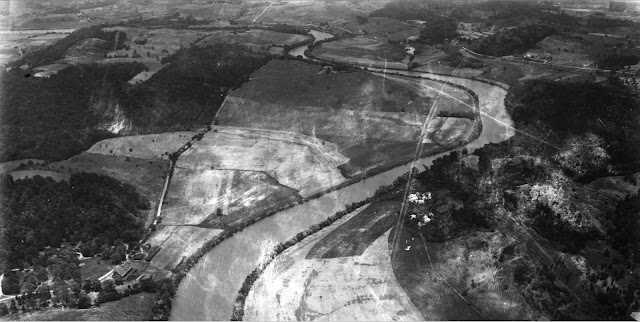 I noticed the road in the last photo and the shape of the river bend. In the first photos I noticed the placement of the island, the road next to the river, and I was able to match the some of houses pictured to current aerial shots. It all came together.

So what are we looking at?

It's Holston Hills Country Club and Neighborhood before there was a golf course or houses. The old farm lent itself nicely to golfing. Holston Hills road is already there but plays host to a barn instead of golf course homes. The road on the other side of the river, it's the old Holston River Rd. (now partially taken by John Sevier Hwy). The shot in the middle "from the other bank" depicts Holston Hills from Asheville Hwy. The road in the foreground is Holston Drive and some of the houses shown are still there.

I thought this might be a fun little diversion from the normal "what we have lost" series. We will get back to the business of surface parking, interstate highways, urban renewal, and "progress" next time.

James said…
Nice detective work! When I saw that sliver of land it made me think of some parts of the river near Sequoyah Hills where the river briefly splits around a bit of land... Made me think of our intrepid boating days.
April 15, 2013 at 8:13 PM

John F. Weaver, Jr. said…
Wow, I just saw this comment. You're absolutely right, I also thought that it could possibly be Looney Island off Sequoyah Park. The bends and bluffs wouldn't line up though
July 17, 2013 at 4:26 PM

Unknown said…
John, I just discovered your blog and have spent an enjoyable evening looking through your posts. Have you ever heard of Wright’s Ferry or Wright’s Landing there in Knoxville? Or perhaps a sanitorium there in the early 1800’s? I would love to find some information on either of these. The ferry and sanitorium were on land of Dr. Isaac Wright (1758-1843.) Great blog. Dianne dyeconley@gmail.com
July 26, 2013 at 10:14 PM